This journal concludes my final reflection on 2015 Seattle Paida Lajin Workshop. Although it was 7 days long, I attended the last three days of the event due to my work schedule. Invited by the event organizer Yezi, I flew to Seattle for the first time. All my impressions on the city came from two romantic films “Sleepless in Seattle” and “When Beijing Meets Seattle.” Today, my memory about Seattle is more than the love stories, it ties closely to the people who are on their self-healing journeys. 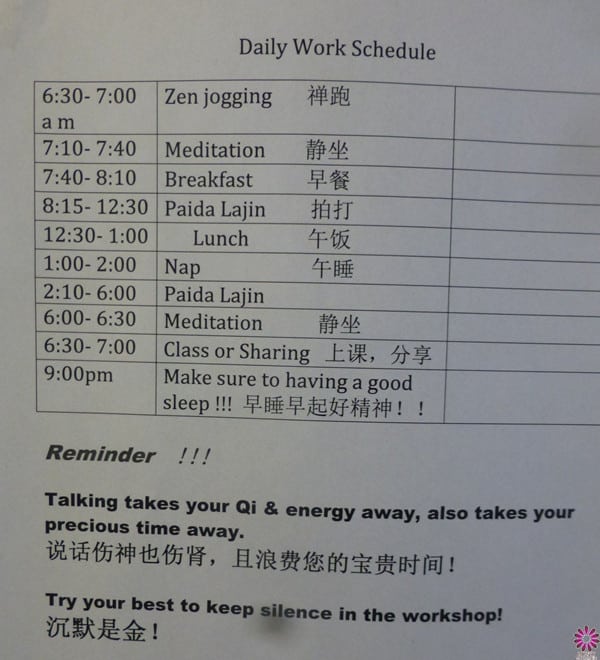 Unlike the sunny Pennsylvania’s Indian summer, the last two days of August in Seattle reminded me of the late autumn and that winter was approaching soon. I was “showered” every day, jogged on the wet ground and wrapped in my light winter jacket. I arrived at Dumas Bay Center in a taxi around 1:00 a.m. Exhausted, I finally caught up a few hour’s sleep before joining everyone in the morning exercises at 6:30 on Saturday morning. “Stretch out your fingers……” Master Xiao walked around to correct the individuals. I quietly swirled my waist like everyone else until Master Xiao noticed my appearance. I was told that there were almost 40 people on the first day of the workshop, some people left earlier, some people arrived later. I was one of a few joined the workshop during the weekend. There were over 25 people on Saturday as I counted. It was not that difficult to figure out the daily routine, which includes morning exercises (such as waist twirling, hitting wall), meditative jogging, meditative standing, meditative sitting, slapping head and face, paida and lajin (mainly focused on paida), napping for one or two hours before paida again in the afternoon, then the day is waning down with meditative sitting, lectures and sharing. According to “carpet bombing” paida approaches, and from the sha on the individual’s bodies, I guessed that they had already done jobs on arms (inside and outside), legs (outside and back), entire back, waists and hips, etc. In the last three days when I was there, we did paida inner legs and chest in groups of three on Saturday; feet and hands in pairs on Sunday; and the front of legs (stomach meridians) on Monday, the last day of the workshop.

Although I can’t speak for everyone that “the workshop was not that much enjoyable,” the life there was very isolated and simple. We drank ginger dates tea, vegetable soup, ate millet porridge and bread, watched no TV, did nothing entertaining but paida and lajin. But people were glad that they went to the workshop and accomplished many impossibles, such as fasting, heavy and long time paida all over the body, healing crisis, and simple life style. All of these attributed to the group efforts and the positive encouragements from each other. It is not unusual to make friends once they have the “physical contact.” Paida has brought people closer. Once, I made a joke to a Caucasian woman by telling her that her messy long hair looked like a bird nest. She shrugged her shoulders, shook her head and said to me that she didn’t care that much because all she wanted was to vomit. She felt dizzy all day long. It was their 5th day of the workshop, 3rd day of the fasting. Looking around, I noticed that many of them looked quite pale and ill, they wore either PJ’s or loose clothes., were silent in most time or spoke in soft voices. They definitely were not in their best shapes to meet late arrivals, but who cared. Everyone was focusing on their own body reactions during the paida and lajin, and dealing with their own healing crisis. On the last day of the workshop, many of them suddenly became energized or “recovered,” as if they have finally walked out of their own little worlds, they became open and more social. As you can imagine, people had much to talk/chat with each other before their departures.

Saturday was the 5th day of the workshop, 3rd day of the fasting. Campers ate nothing but drank the hot tea that was made of ginger and dates. Since I was on the airplanes right after the work on Friday, I chose not to eat anything on the road, which naturally started my fasting on Friday night. Saturday went on smoothly without any solid food. Many first time campers surprised that they lived through 3-day fasting without feeling starving. Sunday morning after the usual meditative jogging, sitting and slapping head, Master Xiao reminded everyone to eat the breakfast (bread and millet porridge) silently and slowly with small bites. Like everyone else in the room, I took my time to bite and chow the bread, tossed the bread from side to side in my mouth until it melted, then I swallowed it. I have never enjoyed eating so slowly or appreciated such simple food, it was so tasty.

To anyone, it is a big commitment to set things aside, and say bye to families and friends before coming to a 7-day health workshop. From what I heard, I learned that quite a few people were returning campers — they attended the similar workshop at least once before. Their coming back has made a clear statement that paida lajin did work. The reason for them to return is either they wanted to continue thoroughly working on certain parts of the body or they were so caught up in every day’s life and work, that they barely had any time to do the paida lajin on their own, so attending the workshop provided them another chance to cleanse the body in their busy lives. Master Xiao welcomed these experienced campers, but he also kindly urge them to be good role models to surroundings, actively practice paida and lajin self healing methods in the daily life because there are so many things that can trigger our poor health. If we don’t act on our own, but wait till to be slapped by others in the workshop, it is against the principal of  self-healing.

Some first time campers have learned paida lajin from books or websites already, but they felt that they could learn more techniques and theories, to educate themselves on recognizing healing crisis and how to deal with them at the workshop. Workshop is a wonderful place to learn such things, because almost everyone has experienced certain degree of the healing crisis. After one day’s fasting and heavy-duty paida and lajin, I felt nausea on Sunday morning.  The uncomfortable feeling went away as the day went by. Compared to others, my symptom was just a piece of cake. Several ladies were so “sick” on Saturday that people had to wrap them up in quilts, feed them some fluid, apply paida lightly on their inner arms. One of the ladies who is diabetic patient had to be sent home because of her reactions; The girl who was from NYC found herself burping non-stop like a machine for an entire day; We were also greatly challenged during the meditative sitting when a lady kept yawning. Anyway, there were many examples like this, but people all took them at ease, no panic, and no one took pills to stop the symptoms, because we all understood that it was fortunate to discover what troubled us inside was able to manifest itself through disease-like symptoms. Among last a few day’s campers, there was a tall lady that I would not skip. She was forced to attend the workshop by her elder sister. The lady has suffered from diseases and operations for years. When she arrived at the workshop, (in her own words) she was a very negative person, by the time she left, she was very grateful that she felt the hope again. People applauded her speech, because people all noticed her changes in the attitude. The other remarkable camper was the youngest 13 year old girl – August, who was dragged by her mother. The teenager admitted that she would rather stay home and play video games with her friends, but meantime she was glad that she had spent seven days with her mother in this health workshop. I admire this mother, she has such strong power over everyone else in her family – according to the daughter, because of her mother, one day everyone was forced to become vegans; now she foresaw more paida and lajin will take place at her house. I sincerely wish the tall lady and August family find the happiness and strength on this self-healing path.


Those who have attended paida lajin workshops know that paida and lajin are not the only two activities campers do in each workshop. During the daily lectures and FQA sessions, Master Xiao has stressed a lot more on cultivating a proper attitude, a healthy life style (e.g. to have a daily routine in the pulses of nature) when maintaining our health. Nothing is too small to be neglected if it contributes to our good health. He also taught the campers several Kungfu moves, such as wall-hitting, squatting while facing the wall, waist twirling, meditative jogging, standing and sitting, etc. Some people might feel overwhelmed after learning so many different methods for good health. They are puzzled more on which one to start off than how to work properly. Instead of trying everything at one time in a monkey mind, it is better to focus on one method only, be persevere with it and become an good about it, wait till the practice benefits both the body and mind.

As Master Xiao commended that without Yezi’s hard work and passionate effort, the 7-day Seattle Paida Lajin Workshop wouldn’t run so smoothly and successfully. Before this workshop, I had met none of them except Master Xiao. I am grateful that I had this opportunity to meet Ye and Bill who came to help with the workshop from Vancouver, and many other campers from all different locations.

Two ladies are worth more ink at the end. They are the true heroes behind the scene. Melody was in charge of all outside transportation and 3 meals a day. Whenever she got a free time, she volunteered to do paida on other people. In order to do a better job, she took one week off work. She was a backbone. When we met first time, Kim mistakenly thought me as a different person. After Master Xiao introduced me to her, she immediately called out, “you are the one with the penman name ‘Hacheng Youlan.'” Kim is indeed a very experienced paida lajin practitioner. She was one of the key figures in the workshop other than the master and Yezi. When the group sped up or slapped in different speeds, Kim would synchronize the paida speed by commanding out loud, or clapping her hands. I found it amazing how such tiny lady had so much power and energy when she called out loud, yet whenever she spoke with someone, she always spoke softly, seemed to be afraid of disturbing the paida atmosphere with her voice. She often reminded those chatty campers to keep silent during the paida. Her presence was very pleasant and comforting to every one, she was more like a closed family member or best friend. Even today I can still recall her soft tone voice and smiling face vividly. One time when we were divided into groups of three, Kim comforted the one who was being slapped on the inner side of the leg by telling her “close your eyes, and just rest.” The pain was real, but nothing we could do about it. So the best thing was to remain calm and focus more on the inner dialogues between our own body and mind. I found Kim’s methods very effective, hope we will have more coaches like Kim in the future workshops.

Paid monthly
US$12.99/mo.
Subscribe
Thanks for signing up!
Thanks for subscribing! Please check your email for further instructions.