Neiguan Point – Not only for the beauty, but also for First-aid 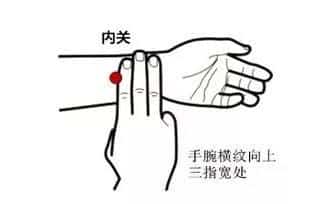 This accupoint is called “beauty point,” because it turns the human body’s internal switches on by stimulating qi and blood circulation, soothing the nerves and nurturing the skin. In addition, this point also plays an important role in the first-aid.

How does TCM view the Neiguan Point?

Neiguan Point was first mentioned in the book Yellow Emperor’s Internal Classics, Lingshu·Meridians. It is one of fifteen Luo Points, can be found on the Arm Pericardium Yin Meridian. It is good for tranquilizing the mind, bringing down the stomach qi, opening chest, calming and relieving pain.

It is linked to the upper, middle and lower Sanjiao, which can be used to improve the heart palpitations, chest pain and chest tightness in the upper Jiao; stomach pain and vomiting in the middle Jiao; menstrual disease and urinary system problems in the lower Jiao.

During the first-aid, it will be much more effective if both inner elbows and/or the entire inner arms are being slapped after the Neiguan Points are worked.

Two First-aid cases of Paida on the Neiguan Points

Case One – First-aid on a heart disease at midnight, by Muxi

My mom is 83 years old this year. She suffers from numerous chronic diseases. Because she is afraid of pain, we haven’t done much Paida  on specific areas. She does Lajin daily though. A few nights ago, she suddenly called me over. “Something is wrong with me. I feel discomfort in my heart, can’t fall asleep at all.” I was scared upon hearing this, so got out of my bed to check on her immediately. Her face was slightly in red. I measured her blood pressure, it was 170/100; her pulses were slightly fast as well. I was not surprised because my mom has a history of high blood pressure and heart disease.

So I asked her whether we should go to hospital or allow me to do the paida on her. She replied, “I don’t want to go to hospital.” “Then let me do the Paida, how does that sound?” I asked. She agreed. I helped her to lay in a comfortable position before starting paida on her left inner elbow. I then slapped her Neiguan Point and the armpit along the pericardium meridian on her left arm. Many dark blue “berries” surged out on her skin in about ten minute’s Paida. Her left arm turned very colorful, and the redness in her face receded. My mom signaled me to stop. I suggested that both arms needed to be slapped. Not surprisingly, the similar Sha results appeared in her right arm. While I was working on her right arm, she became quite sleepy. I measured her pulse and blood pressure again, and was relieved that they were normal. I looked up at the clock, from 1:30 to 2:30, it took me entire one hour to Paida before everything was calmed down.

Case Two – First-aid on a heart disease in a flower shop, by Muxi

One day I went to a neighboring florist’s to buy some flowers. As soon as I walked inside, I noticed the shop owner (at her fifties) was sitting on a chair, didn’t greet me as usual. I was a little surprised, but still waited at the entrance for her attention. After a while, she slowly stood up, and walked up to me. I saw she was in pale, and her motion was extremely slow. So I said to her, “No hurry, take your time.” In a weak whisper, she said, “Heart attack. Someone got me upset.” She pointed at her heart. “Why don’t I try the Paida on her?” I said to myself. So I asked her, “Are you afraid of pain?” She said, “Not afraid.” I said, “Let me try the Paida on you and see if you feel better?” She agreed. I took her left arm, started to slap her inner elbow. Lumps of black Sha appeared in less than two minutes. She told me that she felt much better. I took her words as an encouragement for doing more, so I continued to work on her Neiguan Point and the inner elbow. Before I left the shop, I told her that she can copy the first-aid method if the same situation happens again. I also helped her add Wechat LajinPaida Public Newsletter on her cell phone so that she can study more Paida methods and shared stories. When I went back for flowers in a few days, I was very pleased to know that she had being doing the Paida since then, and she felt much better on her heart. I encouraged her to continue doing the Paida.

Thanks for signing up!
Thanks for subscribing! Please check your email for further instructions.